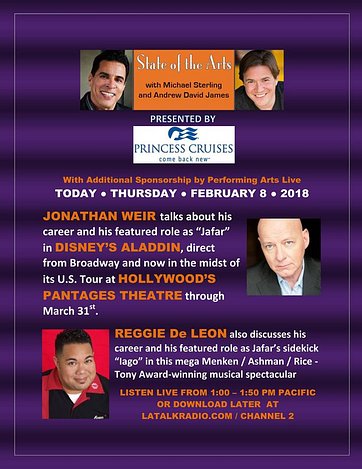 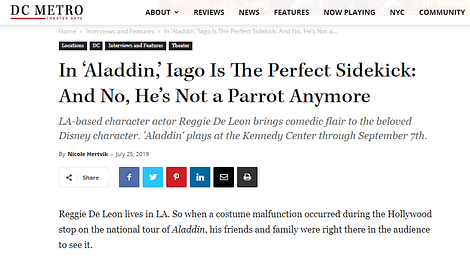 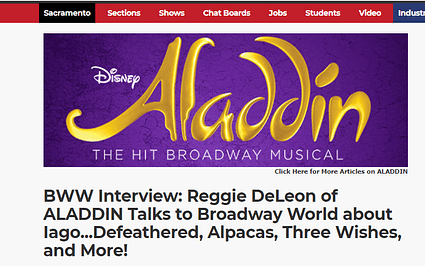 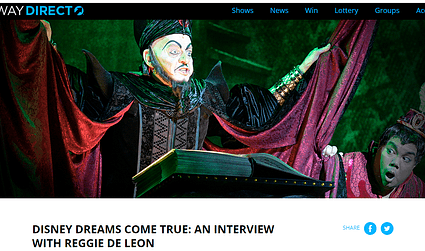 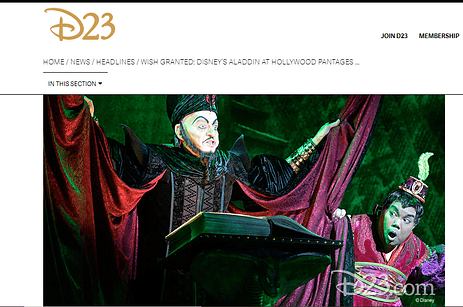 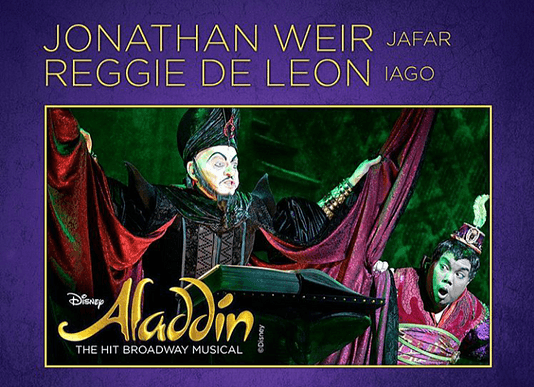 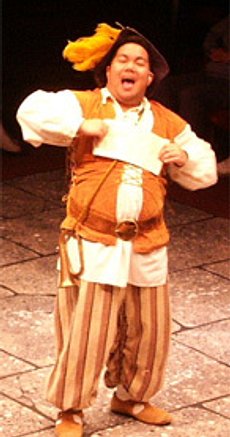 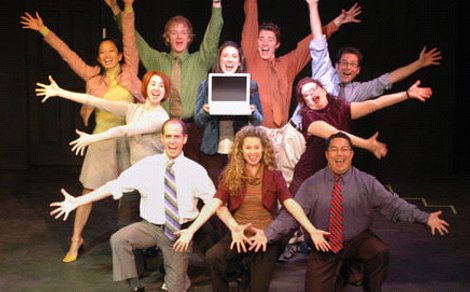 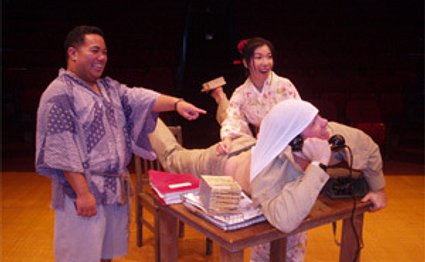 As Sakini in "Teahouse of the August Moon"

With Sean King as Capt. Fisby and Kazumi Nakamura as Lotus Blossom

"Sakini, played by Reggie De Leon, emerges as the clear star, bridging both worlds as interpreter for the military and hometown resident of Tobiki. Sakini is wise and playful, clever and persuasive, helpful and at times a lovable nuisance." - Lisa Dupuy, Glendale News-Press

"The performers in this piece prove top-notch. From Dennis Kyle's neatly timed Cat in the Hat, to Reggie De Leon's earnest, bashful Horton, they have great voices, and a fine sense of ensemble to go with their individual character definition." - Frances Baum Nicholson, San Gabriel Valley Tribune

As Horton the Elephant in "Seussical: The Musical"

As Oliver/Email in "Internet Dating: The Musical"

"The hilarious Reggie De Leon is at his best" - Les Spindle, Backstage

"The acting is energetic and winning, especially... Reggie De Leon, who steals scenes as both an office drone and an email." - James Taylor, Theatre Talk - KCRW Radio

"If not today, then tomorrow I expect to see... Reggie De Leon (a Lou Costello type destined for character actor heaven)... populating many of our best sitcoms." - Don Hart, Beverly Hills Outlook

"Completing the lead trio is Reggie De Leon, an absolute delight in his latest outing as loyal squire Sancho Panza, providing rib-tickling comic relief in 'Man of La Mancha's' lighter moments along with song treats like 'I Like Him' and 'A Little Gossip.'" - Steven Stanley, Stage Scene LA

“Along for the ride is the brilliant French Stewart of Third Rock from the Sun, and of course some natives (Edward Padilla, Mark Fite, Mark Damon Espinoza and the funny Reggie De Leon). – Robert Machray, Stage Mage

WHAT THE CRITICS HAVE TO SAY...

As Warren in "Ordinary Days"

As Sancho in "Man of La Mancha"

"Opening the show and making you excited to be watching this amazing production is the incredible talents of Reggie De Leon... Reggie does an amazing characterization that immediately makes you love his sincerity, innocence, and compassionate character. Not to mention Reggie has amazing vocal talents in delivering humor and passion through every note he sings. From his opening number of "One By One By One," to his segment of "Life Story," to his wonderful contributions to the ensemble numbers like "Big Picture" he will have you smiling throughout." - Lorenzo Marchessi, NoHo Arts District

As Angel in "Matthew Modine Saves the Alpacas"

"De Leon wins you over with his first song, "One by One by One" -- he is just so joyful as his character it is infectious. This is a young man who just finds joy in the little things. His performance does something that I enjoy so much -- he inhabits his character and it seems to just be natural and exuberant... Both De Leon and Kitani sang wonderfully and just lit up the stage whenever they were on it." - Daniel Faigin, Observations Along the Road

As Iago in Disney's "Aladdin"

"My favorite character from Aladdin has always been Iago, and Reggie De Leon did not disappoint. This loveable-huggable sidekick of the evil Jafar (Jonathan Weir) was just a joy to watch every time that he took stage. From the wisecracks to his penguin-like waddle, you will appreciate that he isn't a scarlet macaw for this Broadway performance."

"Weir is joined by Reggie De Leon, who plays Jafar's nefarious, albeit uproarious, sycophantic sidekick, Iago. De Leon has a refreshing interpretation of his character's motivations, and oftentimes transcends the parameters of his role and stature by taking center stage to the delight of the crowd." - Iman Jalali, LA Excites

"But the Genie is not the reason to go see this familiar story performed live. That honor belongs to both the magic carpet and to Reggie De Leon, who plays Iago, a character in the animated classic portrayed as a wise-cracking scarlet macaw. Iago, as a human sidekick to Jafar (Jonathan Weir), is hysterical and provides a consistent and much-needed blast of subversive glee to the musical." - John W. Allman, Creative Loafing Tampa Bay

"The true highlight of the show is De Leon's Sancho. His small stature overflows with an irrepresible enthusiasm that is as infectious as it is well-intentioned. He displays an exceptional voice and constant good nature. De Leon conveys his character's indefagitable love for the old knight without seeming overzealous or foolish about it. And despite the fact that he could have easily stolen every scene he was in, De Leon stuck to the role of sidekick, never overshadowing Quixote." - Daniel Lehman, A&E Editor for the Los Angeles Loyolan

Click the Images Below to Read the Corresponding Interviews!